The 2019/2020 season will see a new challenge for Phantoms NIHL2 side as they bring in fresh faces both on and off the ice in a quest to develop the next batch of talented young players for Phantoms flagship side. Having recently prepared and delivered the likes of Nathan Pollard, Nathan Long, Taylor Romeo, Jack Escott, James White, Jarvis Hunt, Craig Ellis, Brad Bowering, Ryan Bainborough and this season’s new prospects Conor Pollard and Ross Clarke to the top side, next season will be very much the start of a new era that will see a fresh batch of youngsters attempt to follow in their footsteps.

Newly appointed Team Manager Toby Clark is looking well ahead in terms of the likely next batch of top team recruits, “in terms of delivering real numbers for the top side, we are looking at this season being year one of a four year programme with a real powerful batch of talent looking to push through into Phantoms 2 in year three. This season we have a seventeen year old in net with Luke Clark and a few under 18’s also playing for us alongside the likes of Shaun Yardley and Rob McDonald, etc who will provide valuable experience for the younger players to feed off but by year three there should be some great youth talent coming through into the team.” 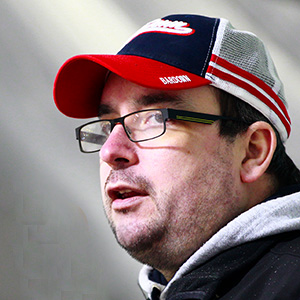 However, even with an influx of younger players, Toby is not sitting back in terms of expectations, “alongside the development of new talent, I want to see this side promoted to NIHL1 by the end of this four year programme. Expectations this new season are to be competitive and to finish as high as we can. The likes of Haringey, Bristol and Guildford will be battling it out at the top and all three are looking to secure promotion but we hope to be right behind them and we’ll also be looking to give those teams a right good game when they visit Bretton !”

One of the key off-ice goals this season will be to free up coaches Stevie Johnson and Stephen Wren to major on the coaching side rather than having to manage all the off-ice supporting tasks for game nights and that should be achievable with Toby’s appointment as Team Manager. “I’ll be basically running the team and doing the paperwork and organising game days and roles like organising goal judges, announcer/DJ, clock person, money collection, etc. The team needed someone to run it and as my son, Luke, is playing this season, Dave and Jo (Lane) asked me if I would like to be manager and help out the coaches with these supporting jobs in order to free them up to coach instead of having to worry about other matters.”

Toby has already moved to strengthen the off-ice operations by securing a fitness coach and by bringing in sponsorship to help reduce the financial burden on players with Phantoms 2 remaining a “pay to play” side. “The fitness coach will work with the players before the on-ice training and I’m also looking to recruit a physio dedicated fully to Phantoms 2. We are very much looking and learning from the Phantoms 1 set-up and taking on board good practices as well as staying aware of the direction Slava is taking his side so that when we deliver top prospects in the seasons ahead, they will already be schooled in the basic approach that Slava is taking and ready to fit in quickly.”

“My message is very much that we will be preparing for this new season in a more professional way than we’ve probably been used to and we’ll have the supporting infrastructure and organisation in place to push players harder than they may have been used to and I’m expecting to see that deliver real benefits if they all respond positively”. 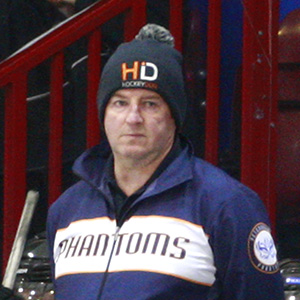 Coach Stevie Johnson also sees this season as being a fresh start for the team, “in effect we’ve gone back round in a circle to where we were four years ago. The aim back then was to be competitive and challenge for a trophy over a four year programme as well as getting players up to speed and ready for Phantoms 1. We definitely achieved those goals with winning the treble and seeing a significant number of players moving up and still moving up this season shows that we did well on that one too. This year we’ll be going back to basics with a very young team and hopefully we’ll achieve the same success in developing players for Slava over the next four years. As a coach, I will see what systems Slava will be using and teach the players these systems (maybe not as fast) so that if any get the chance to play up then the basics are installed and the step up is not too daunting.”

Being a “pay-to-play” side poses its own problems for the coaching and management staff with players not always available for training and/or games, especially road games but, regardless of these unique challenges, its great to see the side having a clear sense of purpose and a clear set of goals with the promotion of so many players into the Phantoms 1 side proving the invaluable role the side has at the club both now and for the future.

If you have a business that can help support Phantoms 2 then a range of sponsorship opportunities are available and manager Toby Clark would love to hear from you.