Former Peterborough Penguin forward Kim Lane will be going for Gold with Team GB in the forthcoming World Championships in Slovenia. Along with the host side, our girls will be matching up with Australia, Korea, Mexico and Holland. Last year, Team GB finished third in the group of six but will be going all out for first place Gold and promotion to Division 1 B which would be the third tier in world standings with the top tier holding the likes of USA and Canada.

Kim made her “debut” on Bretton ice back in 2005 as a seven year old mascot for the Penguins but she went on to register for the Penguins U16s as a nine year old. During the 2008/2009 U16s season she played alongside Izzy Wallace who also went on to carry the Penguins flag at National level but a move across to play for Bracknell’s U16 team preceded Kim’s one appearance for the Penguins Senior team in 2013 where she scored two goals. After that it was Elite League hockey with the Bracknell Queen Bees and, aside from progression through the domestic leagues, Kim was also selected for a successful Team GB Under 18s side.

Former colleagues at Bretton watch Kim’s progression with great pride. Maggie Rastall recalls, “Kim always had great skill and speed so it was obvious to us all that we’d see her playing for GB Seniors one day. When she trained and played for the Penguins she was always encouraging and supportive to the newer team members and she was a really great team player”.

Last season, Kim took on the daunting task of playing an even higher level of hockey in Switzerland, where she helped the SC Reinach Damen team to bronze medal in the play-offs. 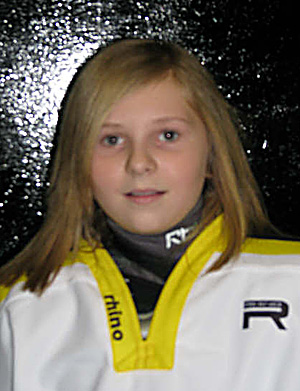 Speaking to the Peterborough Telegraph, Kim expressed delight and confidence at her call up …… “I’m really excited for the World Championships and feel we have a really good chance of the gold medal. We’ve just fallen short at the final hurdle in the last couple of tournaments but hopefully it can be different this time around and we can finally get the gold and promotion we deserve.”

“My personal goal is to become a more senior and reliable player. I managed a few points at the last World Championships but I’m looking for more goals and assists this time while doing any jobs required of me for the team. Playing in Switzerland has been an amazing experience and I’ve learned so much as well as having the chance to play alongside and against some extremely talented players. Among them are some who were at the Winter Olympics and others who are either former or future Swiss internationals. The standard over there is very high and I feel it has helped me improve every aspect of my game. The life experience has also been better than I could ever have imagined. I’ve made lifelong friends and created great memories while being based in a beautiful country. The language barrier and being away from home for a long time was tough, but I’m extremely grateful to have had the opportunity and to those who have supported me all the way.”