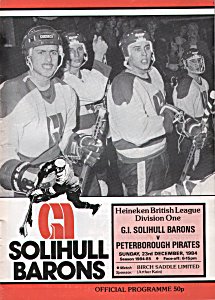 1984/85 represented Pirates third season in British ice hockey and a season that commenced with high expectations among the sizeable Pirates following that had taken wholeheartedly to the city’s exciting new sport. Home crowds were now exceeding 1,000 and the Pirates away following was not so much measured in terms of fans but coaches.

Also well established by now was the local rivalry between Pirates and the Solihull Barons who were now resurgent under the flamboyant management of then TV sporting pundit Gary Newbon. Pirates first two seasons had seen numerous clashes between the two sides with a whole host of infamous incidents to look back on to stoke up the intensity every time the two met. To add further fuel to the fire, Pirates previous visit to Hobs Moat Road had been at the back end of the 1983/84 season when Pirates destroyed Barons championship hopes by wiping them out 4 – 11 in front of their own fans.

Having taken the then radical step of filling one of their three allowed import berths with an overseas netminder, Ron “The Kat” Katerynuk, in 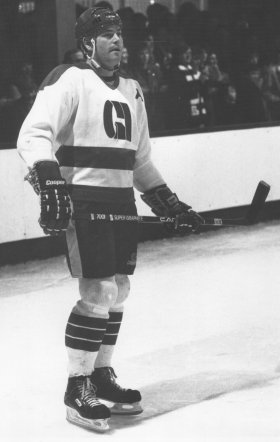 The Barons side was once again based around player-coach and defenceman Charlie “Chuck” Taylor, the man Pirates fans loved to hate ! He had drafted in Canadian forward Mark Budz and one of the most entertaining players to have visited these shores, forward “Dancing” Dean Vogelgesang who had already become legend around British rinks with his completely over the top goal celebrations !

The Heineken British League Division One consisted of eleven teams with the league season being a very short one based on one home and one away match up, thus there was no room for slip-ups. Early season form had seen the Barons skate to seven straight victories, scoring a staggering 125 goals, but Pirates were also signalling their challenge with six straight wins and hockey pundits had already rubber-stamped the two Barons/Pirates clashes as the two-legged title deciders.

This was how the table looked going into the big game ………….

The pre-game mood in the Barons camp was, not surprisingly, a very bullish one. Chuck Taylor commented …… “it is no secret that there is no love lost between the clubs. Up to now, they are the only other unbeaten team …… as I say, up to now ! We have no intention of giving up our unbeaten league record.” 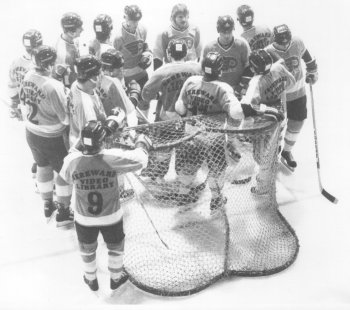 Pirates, on the other hand, had been making it known that they considered themselves the underdogs. Barons had emptied all barrels at struggling Grimsby Dynamos the week before, setting a new league record with a 37 – 2 victory but Pirates had played only once since December 2nd. “Barons have three fine Canadians and a dedicated, good calibre netminder in David Graham”, commented Ron Katerynuk, “In our camp, we have some slight injury worries over Shannon Hope but expect him to play a leading part”.

Pirates fans had been looking forward to the game since the fixture list first appeared and, in a pre-Christmas carnival mood, they headed across to the Midlands in a huge convoy of coaches and cars ………. according to a subsequent Barons press release, a staggering 450 Pirates fans eventually crammed into a heaving Hobs Moat Road to cheer their side on, bringing the total attendance to 2,500.

The vocal support from the visiting fans was huge and the game faced off before a deafening crescendo of chant and counter chant as the Pirates and Barons fans gave it all they had. Dramatically, just seventeen seconds into the game, Pirates fans were somersaulting across the benches and dancing in the aisles as Kenny McKie ripped the puck through a static David Graham to give his side the lead. The goal stung Barons but their response came in the form of a string of indisciplines as they struggled to come to terms with a side that was showing no respect for their league position. Shannon Hope and Alcide Jutras took it in turns to punish the home side as Pirates raced into a 6 – 2 lead by the end of the first period. 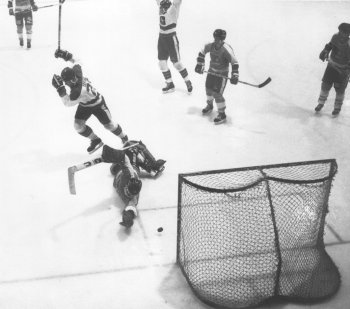 A shell-shocked Barons came out with all guns blazing in the middle period but, in true Ali style, Katerynuk’s well groomed Pirates simply soaked it up and waited for Barons frustrations to reach breaking point ……. which they did very quickly. Barons lost two players to gross misconduct penalties and Pirates stepped up to painfully and gleefully rub salt in the wounds as they took the period 3 – 0.

In the final period, Barons attempted a fight back through Taylor and Budz but once Pirates had duly responded, including a hat-trick marker from Kenny McKie at 50.17, they simply cracked ! The remainder of the game took an age to complete as Barons players completely lost the plot, losing a further three players on gross misconducts and racking up a total of 107 penalty minutes as Pirates ran out 13 – 6 winners.

The result is one that stunned the hockey world. Not only had Barons confidently set their stall out to be Division One champions but, with the backing of major sponsors and the high profile Gary Newbon at the helm, they had pronounced themselves the new force in British hockey. Pirates coach Ron Katerynuk had been ridiculed by the Barons for turning up at Lee Valley the previous week to video the Barons in action but the “Kat” was nobody’s fool ……. he had done his homework well and was fully intending to have the last laugh. 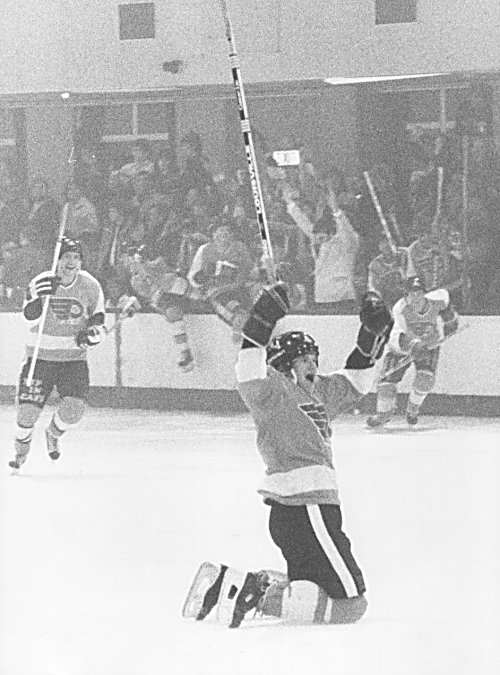 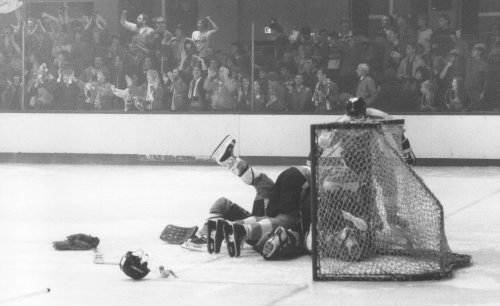 Barons supremo Gary Newbon was so devastated by the loss and, in particular, by the indiscipline shown by his key players that he was soon to sever his links both with Barons and with British hockey ………. “What do we do, we fine players, we discipline them, we punish them, we preach at them …….. and then that happens !”, he blasted.

Pirates went on from this point to maintain their 100% record right up to Sunday 24th February 1985 when the Barons, who had recovered to win all their subsequent games, travelled to Peterborough for the return. A sell out all ticket crowd, who had turned up so early that the queue started at the box office and circumnavigated the entire rink before reappearing back at the front, witnessed a fired up Barons take the game 10 – 7 but it was not enough for the aggregate advantage and Pirates went on to take the league title and promotion to the Premier division.