Having attended Romford’s old Rom Valley Way rink throughout the 1990s Pirates days and into the early 2000s Phantoms era, I was keen to take a peek at the newly opened facility for Phantoms visit last night.

The first thing that strikes you is the location which is pretty much in the centre of town …… in fact the main shopping centre car park literally sits conveniently opposite the shiny blue cube like building known as the Sapphire Ice & Leisure Centre. It doesn’t actually look like a building housing an ice rink ….. it looks like a shiny new office block that goes up rather than out but the rather huge queue outside – not ideal on a freezing cold day – soon gave it away !

The Leisure Centre is actually vertically stacked with a swimming pool and gym on the ground floor and an ice-rink upstairs ….. and its quite a lot of stairs too so the Raiders fans are going to become the fittest in the league ! 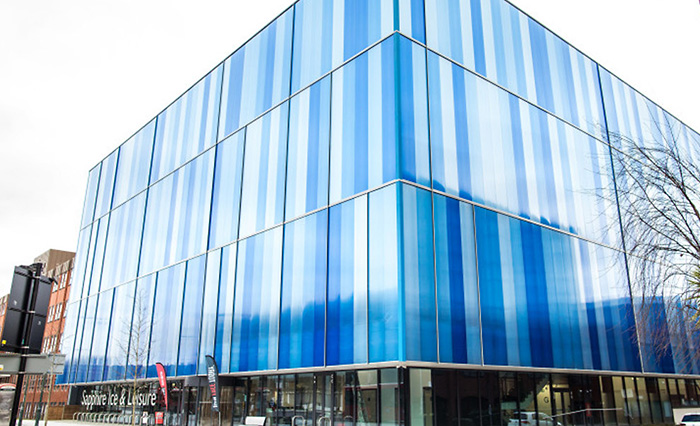 The ice arena is typical new build ….. very clean, very shiny but mostly all there for a good hockey night. Most of the seats are stacked on one side but they don’t extend around the ends so it keeps the fans steeply stacked but bunched up which makes for a great hockey night experience and atmosphere. Away fans sit opposite on the end of a much narrower three row seating area which keeps you a little low but its okay.

The rink is pleasantly warm, the concrete bedded ice looks reasonable but already heavily scarred and the only downers for me were the limited toilet facilities (maybe I just missed them) and the crazy refreshment prices featuring £3 for a tea/coffee ….. but I guess that’s London for you !

Anyway, my overriding conclusion was definitely close to “wow” and that was quickly followed by “we need one of these in Peterborough” like right now ….. please ?

Unfortunately, funding would be the issue here. This facility is council funded or sort of council funded. The building costs of £25M mostly came from the sale of the original Rom Valley Way site to Morrisons Supermarket albeit Morrisons very quickly sold it on again after having second thoughts about their supermarket plans. Its hard to see similar plans here in Peterborough as the Bretton rink is not council owned so we’d probably need to hope for the Bishops Road pool to be sold in favour of a new centre …… preferably centrally located.

What was very evident last night was that the new facility was pulling in serious numbers. The swimming pool was packed, the hockey is selling out and there were even big queues as we left the game with young revellers looking to pour in for a Saturday night disco/skating session.

The new facility has certainly rejuvenated Romford ice hockey and given it a fresh and exciting start …… something we can only dream of here in Peterborough !