Coach Slava Koulikov has claimed in tonight’s Peterborough Telegraph that Phantoms will not be approaching Saturday’s home game against Streatham with any special plans, despite needing to significantly boost their goal difference to have a chance of edging out Basingstoke Bison in the final weekend race to the league title.

“It’s only natural to think about scoring lots of goals but we cannot get distracted by that. We still need to play our hockey in the right way and if we do then the goals will come. Our approach to this game will be the same as any other.”

Koulikov also appealed to fans to return to the rink in the numbers that cheered them on to a win over Bison last Sunday. “It will really help us if the fans could fill the building in the way they did against Basingstoke …… they were so loud from the warm-up to the final buzzer and their backing was hugely important to us. I can assure them that we will not be giving up and we will play for the full sixty minutes and we hope they are behind us throughout.” 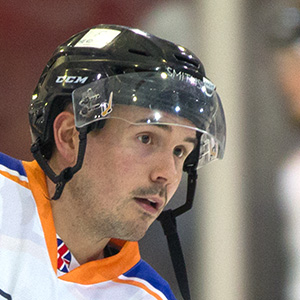 Last weekend saw Nathan Salem pick up both MoM awards for Phantoms and the re-energised forward fancies their chances on Saturday, “if we play against Streatham like we did against Basingstoke then I think we could easily manage six or seven goals. We just have to focus on our own job and not even think about what Basingstoke are doing.”

Basingstoke will have the returning Roman Malinik in their ranks for the weekend but will continue to be without the injured Grant Rounding.  Bison coach Doug Sheppard sees the Sunday trip to Cardiff as the key game, “we’ll know what we need to do by the time we go to Cardiff which is good and it is matter of not putting too much pressure on the players. We have to continue to play as a team and I’m sure the goals will come.”

Nathan Salem, however, thinks that having three games in three days may prove tougher than Bison think, “they have a tough run in and they don’t have the biggest roster. By the time they get to Cardiff on Sunday, their legs could be feeling it on the big ice there. Cardiff have done well to take Swindon and Invicta to overtime recently so anything can happen.”

Saturday’s game faces off at the usual 7pm, doors open from 6pm …… be there ! #GoPhantoms