In 2016, a surveyors report on the ice rink at Basingstoke confirmed the observations of many regular Bison fans that there were indeed significant problems requiring resolution if the rink was to continue for any period of time. 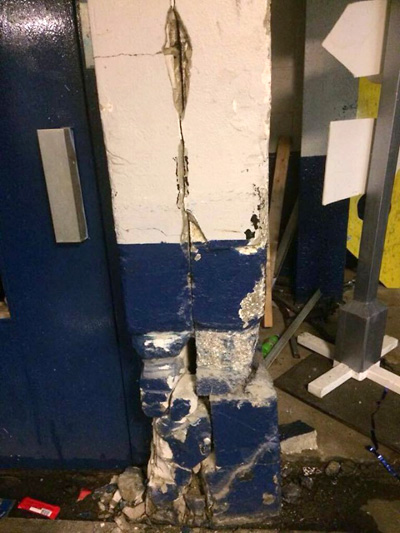 Damage in the rink

As with the rink here at Bretton, Basingstoke’s rink followed the same low cost building formula adopted by the many “new” rinks that arrived in the 1980s and 1990s, namely the ice pad was built on top of a sand base rather than a more expensive concrete base.

The problem then becomes that, as we all remember (just) from school science lessons, frozen matter expands and you slowly get an upward doming effect that pushes up through the sand, damaging the ice pad and also damaging any structures immediately surrounding the ice-pad.

That is the problem at Basingstoke whose metal framed building is actually structurally sound on the outside but, on the inside where brick inner structures are based closer to the ice-pad, there is upward movement ( 8″ – 10″) from the underlying chalk foundations causing worrying looking cracks to appear in the stands to the extent that seating down one side of the rink is closed due to being unsafe ….. or, in crude terms, it might just fall down !

Now going back to the beginning of this introduction, an ice-pad built on concrete doesn’t have this problem as the concrete layer bounces the cold back up which makes the refrigeration process more efficient, puts less strain on the refrigeration plant and, most important to hockey players, produces “harder” (colder) ice that doesn’t break up so easily and makes for a better quality of hockey ….. in theory !

Now why doesn’t Planet Ice simply rip it all up, lay down a concrete base and all is good to go for many years ?

Well the answer is that it costs a huge amount of money to do that so they need to be certain that an investment of that size makes sense from a business perspective and …… they are not sure that is the case.

Their reason for doubt is two-fold. Firstly, it was announced last year that there would be a new £20M “olympic sized” ice rink in nearby Winchester which is about half hour’s drive from the Basingstoke rink. Would that mean rink customers might be heading south west to use the new rink rather than the older Planet Ice rink ?

Closely following that was the news that the owners of the Leisure Park on which the current rink is based were going to undertake a radical £300M redevelopment (see header image) and that would include a proposed new rink ….. or at least a massive revamp of the existing rink. That all sounded perfectly timed in terms of resolving the current rink’s issues but optimism there has now plummeted as, firstly, the proposed date for starting the redevelopment has moved back to 2023 at the very earliest with some suggesting it may not even start until 2025 and then, secondly, the developers proposed new rink has now become a decidedly unconvincing “possibility” with the site being open to what the public decide they want ….. will they want a rink more than some other leisure facility ?

Not surprisingly, Planet Ice do not want to invest huge sums of money into a rink (even if they had those funds) that may either be redeveloped in the near future anyway or simply bulldozed to make way for some other leisure facility. Additionally, if Planet Ice seek to raise funds somehow, the current confused uncertainty would not be attractive to any potential investor nor does it look to provide any incentive for the council to advance public money as grants/loans and any kind of financing through funds raised from fans/users would need a very transparent structure that included (unlikely) representation in running the rink. 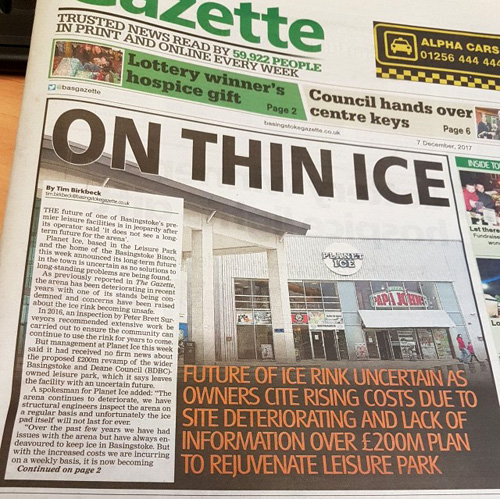 There has clearly been previous disagreement between the council and Planet Ice over who should pay for what with much of this undoubtedly arising from the terms of the original lease. The council initially leased out the rink on a “full-maintenance” basis so when the “permafrost” damage was first reported many years ago, the council told Planet Ice to deal with it as per their lease but when Planet Ice found out how much it would cost, they not surprisingly returned to the council for help …… and they were not interested ! They were also not interested in plans for a temporary rink to fill the gap between old and new !

The original lease was described as “150+ years with a peppercorn rent” with Planet Ice being left to operate the rink, largely with no gain or loss to the council. This probably made sense at the time because it was previously being run by the council as a loss making facility. However, all the other leases on the Leisure Park are for much shorter terms and with much higher rents …… as well as including forced re-purchase clauses as the council are looking for those facilities to make them money. On that basis, are the council trying to push Planet Ice out so they can re-lease the land and generate money from it ?

Whatever the intentions, the two parties have failed to reach an agreement and now time has in-effect run out.

As things stand, a new surveyors inspection was completed last week and the report from that is currently awaited albeit very few expect anything but negative news. The result is certain to conclude that significant investment is needed to keep the rink alive and against a backdrop of uncertain plans and a council that appears to have little interest in maintaining an ice-rink in the area, that investment would surely make no financial sense for any party.

Although hard, factual information is conspicuous by its absence at the moment, belief in the Bison camp is that if the rink is, in-effect, condemned then the hockey set-up will move to Slough’s rink and that the remnants of the Bison set up will morph with a new Slough Jets NIHL1 side.