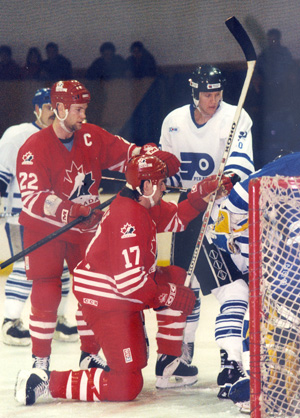 Pirates response to the frightening challenge ahead of them was to draft in a few guests from the British Leagues, namely Paul Adey, Rick Brebant and Garth Premak (Nottingham imports), Russ Parent and Kevin Conway (Basingstoke imports) and Chris Palmer (Fife import who actually played the second half of the game on trial with Team Canada !).

Team Canada dominated the early proceedings and took the lead on 4:15 through former NHL Pittsburgh winger Jamie Leach but although the local fans were ready for the floodgates to open, the Pirates were working off a different script altogether. At 7:52, Anthony Payne had the audacity to tie the game and if that didn’t raise a few Canadian eyebrows then a Randy Smith go-ahead goal less than two minutes later certainly did !

The Canadians upped the tempo and Pirates were chasing shadows for the rest of the period but 21 year old Pirates netminder Colin Hamilton was seeing it like a beachball and single handedly kept the scoreline at 2-1 at the first break.

Now that the Canadians had got over the shock of playing on the small Bretton ice, fans were anticipating period two might see a major onslaught 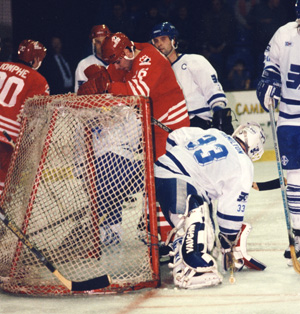 but alas it wasn’t the case. Backstopped by a netminder having the game of his life, Pirates thwarted everything the Canadians threw at them and even threatened to extend their lead at the other end. The period ended with no additions to the 2-1 scoreline and the Skate Hire area in the break was humming with fans trying to make sense of the fact that Peterborough hockey was handing it to a Team Canada side awash with past, present and future NHL players !

Period three picked up where period two finished with Hamilton still backstopping a superb defensive rearguard but, with the period clock ticking down past the midpoint, the increasing nervousness of fans gave way to disbelief and euphoria as Randy Smith and Cam Plante combined on the powerplay to set up British hockey’s sharpest of sharpshooters, Rick Brebant, and even against this opposition he wasn’t going to miss …… Pirates were 3-1 up with less than ten minutes to go !

Now the slick, stylish passing game of the Canadians gave way to something a lot more intense as the touring side signaled their intent to salvage the game and straight from the restart Jeff Sebastian (who was to go on to play EIHL in later years) pulled one back and now it was down to a narrow 3-2 lead and a clock running down fast. 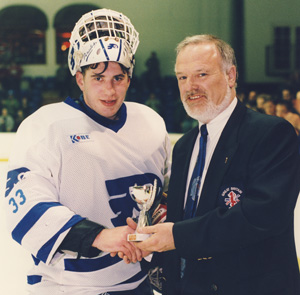 The last minutes of the game saw Team Canada camped in the Pirates zone but the bus was well and truly parked with bodies being layed on the line and netminder Colin Hamilton still standing up to anything and everything that got through. With the Bretton crowd in full voice, Pirates hung on and defeated the mighty Team Canada in what to this day is probably the most remarkable victory ever witnessed at Bretton.

The Canadians returned to Bretton a week later for a testimonial game against a Pirates side without reinforcements and they were not in a mood to forget the previous week’s result, running out 2-19 winners.

Some rival fans tried to play down the Pirates victory, pointing out that the Canadians were still jet-lagged but coach Renney made it clear after the game that it was not an excuse and that his players were well used to flying to games and were “fully match ready” ! 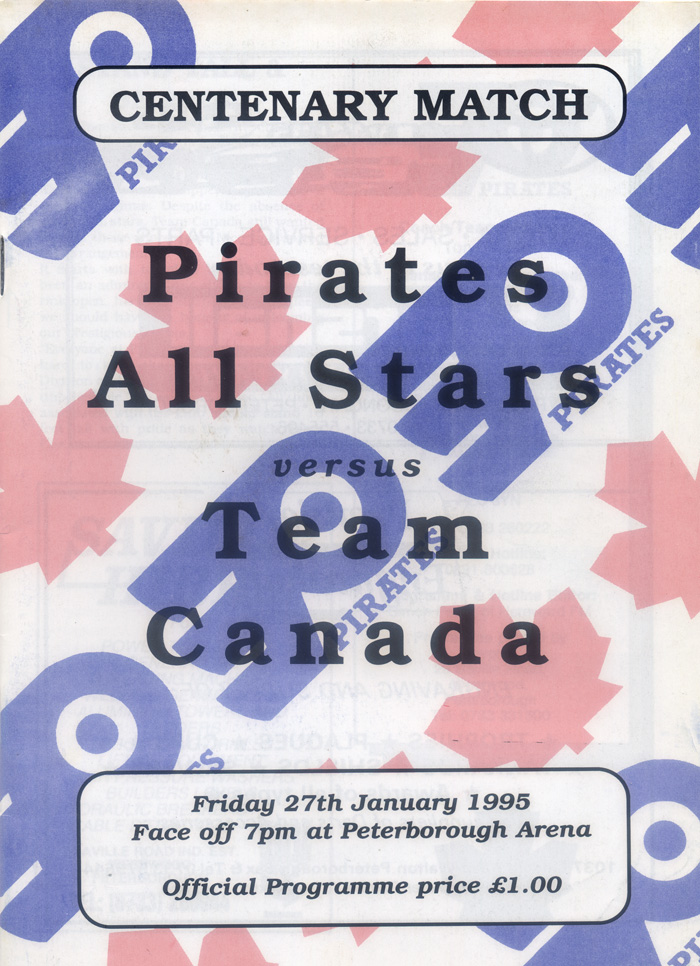