As familiar faces go, Ken Cross was as much a part of Peterborough ice hockey for over twenty years as Charlie Chaplin selling his 50/50 tickets was and as Audrey Wells selling her SOYB tickets was (and still is !) and, indeed, as any character around our rink ever was. It simply wasn’t hockey night if Ken wasn’t there and people asked questions whenever he was absent, even if Ken was not known to them beyond being a happy, smiling fan decked out in as many Pirates/Phantoms club colours as he could possibly wear !

Ken was part of the furniture, he was an integral part of the match night experience for so many right through from 1982 to 2008. He had a kind word for anybody and everybody and became Peterborough hockey’s favourite uncle. He was also often seen parading his “#1 Fan” badge, a tag that had been presented to him by club directors in the 1990s and a tag that he was very proud of. It was also a tag that he richly deserved and I’ll offer up some backing for that before this piece ends. 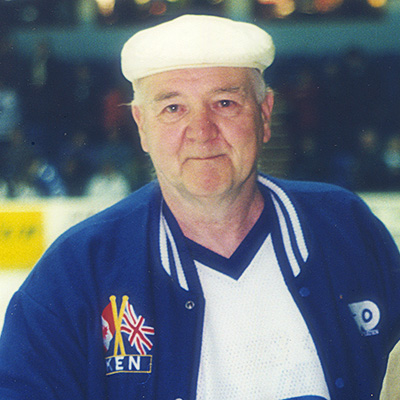 I recently managed to track Ken down to a residential care home where I found him sitting in a quiet corner of his quiet room, a room adorned with hockey photos and with an early image of a youthful Ken with and even more youthful Doug McEwen watching over him from the wall above his chair. “I loved those guys ….. are they still about?”, he asked with an enquiring smile.

We got talking about hockey, you guessed it, Ken’s favourite topic ……

So when and how did the love affair with hockey start ?

“Pretty much at the start – back in 1982. I used to go to all the speedway matches and the guy in front kept talking about the ice hockey at Bretton so I thought why not ? I went along, loved it and kept loving it. I was hooked !”

Who were the players that you remembered in those early days ?

“I remember most of them but never forgotten John Lawless ….. ‘little legs’ we called him but I remember the Hunter brothers and Mike Andrews and more”

I remember you painting your whole life in Pirates colours …….

“I did. I even painted my car bright orange with Pirates logos on it and my house on Gilpin Street became a bit of a shrine with orange walls and lots of Pirates memorabilia all over them ….. I was a bit mad but I loved my hockey !”

There has always been talk of your financial backing of the club during difficult times in the 1990s and I’ve heard many versions of events so what actually happened ?

“It wasn’t a loan. The club was in trouble and it looked like they were going to die. The club was very special to me, it was a huge part of my life and I couldn’t let that happen so I gave them the money. It wasn’t a loan and I knew that ….. I suppose it was a gift but the club needed it” 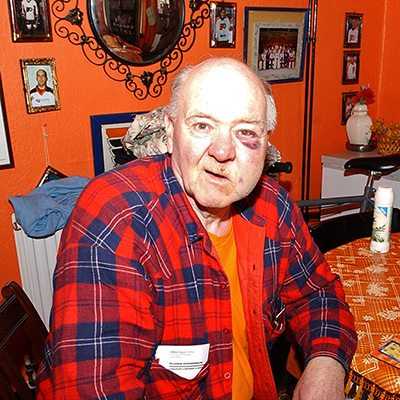 What were your feelings when Pirates eventually did die and it became clear that this time they weren’t coming back ? Like me, you made the transition but what was your thinking ?

“It was just a loyalty thing. I wasn’t going to walk away simply because of what had happened off the ice. It was still my team, still my players and I was never going to leave them. For me, it was the same team”

Tell us about the latter days of your time with Phantoms when you travelled to home games in a mobility scooter.

“Yes, I did ….. about five miles round trip from my home in New England to the rink and back. It was a bit scary in the dark on cold nights travelling along busy roads but I always made it ….. I wasn’t going to miss my hockey !”

What made you give up in the end ?

“I didn’t choose to give up, I didn’t want to give up. I was moved from my house into a care home and then somebody stole my scooter from outside the care home. Now I can’t get out or to the games because I only have a wheelchair and nobody here is going to wheel me to the games …… although I do try to convert them to being hockey fans in the hope they’d take me !”

What do you miss most about the hockey ?

“Oh everything ….. I’d love to get back. Love to see the team and all the people who I knew and who knew me. All the familiar faces. I don’t get many visitors here and I miss the people and the friendly faces.”

Do you keep in touch with how the team is going ?

“I try but its not easy. I have somebody who calls me about once a month and gives me a brief update but now we have no daily newspapers, its hard to keep up with what is happening but I do miss it all”. 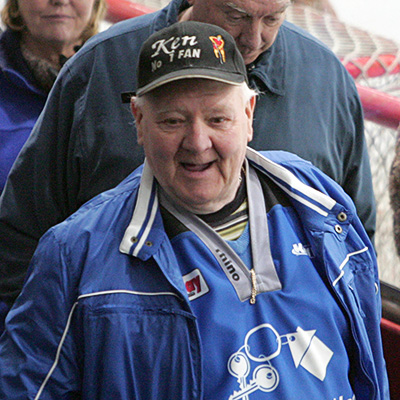 Ken in his Phantoms days

By the end of our chat, the pleasure of Ken’s company and his infectious enthusiasm was giving way to frustration coupled with a burning desire to make something good happen for him. Frustration that we all, fans included, are overseeing a true legend of our fanbase sitting in a quiet corner of a care home wanting nothing more in life than to get to a game. Frustration that we’ve allowed a situation to arise where Ken actually asked me “they don’t really remember me still ….. do they ?” when talking about fans and players.

This is a fan who gave away everything he had to keep our hockey club from going bust, a fan who gave up all he had in order to give us what we still enjoy and take for granted today …… he deserves both recognition and as much help as we can offer to him in return.

A true Peterborough hockey hero and very much “one of ours”. I think we, the fans, owe him something here so if you want to help then read on below …….

How YOU can help re-unite Ken with Peterborough hockey !

We will see what we can do to get Ken to a game or two but here’s how YOU can help out.

If you know Ken or knew Ken then PLEASE pay him a visit for a chat. Ken is still the Ken of old – very sharp, very witty, very with it but he gets very few visitors and he truly values just being able to have a chat. He thinks nobody remembers him from hockey days so lets prove him wrong. He is at The Tudors in Stanground and they are great people. Simply call them on (01733) 892844 or email Joanne at the Tudors who knows Ken well via TheTudors@goldcarehomes.com . I promised Ken he would have visitors and his face lit up so please find the time for him !

If you can’t get over to see Ken then please take time to send him a letter or send him a card and say “hi” or even “thank you” ! You can reach Ken at Ken Cross, c/o The Tudors,  North St, Peterborough PE2 8HR.