Phantoms home fixture with Basingstoke on Sunday 4th November will be a very special night not only because of the potentially top drawer fixture, not only because of a special night to say thank you to super-fan Ken Cross for all he has done for Peterborough hockey but also because it will see the return to Bretton for the first time in 34 years of legendary D-man Rob Carnegie. 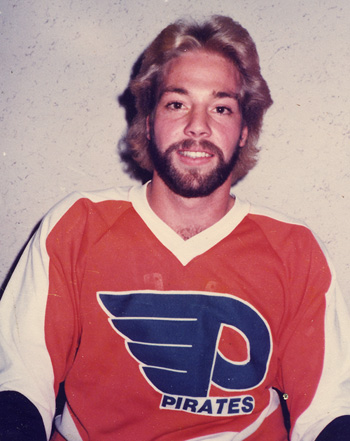 Rob arrived on the Peterborough hockey scene in September 1982 and, along with John Lawless, was Peterborough hockey’s first “import”. Rob was offered £50 a week plus a flat to stay in plus free scampi and chips in the rink cafe ! At the time, Pirates didn’t have enough money for another “import” player but Rob offered to split his £50 a week with John Lawless on the basis that if they started to get more people to the games then they would look for an increase. The club agreed so both players were signed and they turned the attendance at their first game of 300 fans into 1,200 fans within three months so they certainly made an impression !

By today’s standards, Rob would be a regulation tough North American D-man but back in 1982 local fans knew nothing about such players and, to them, he was part comic book superhero and part Greek God. 36 years downline and fans still talk of the day Rob was knocked unconscious in a game, rushed off to hospital and, despite being ordered home with concussion, rushed back again against doctor’s orders to play the last period bandaged up and with only one open eye to score two goals and win man of the match ….. certainly the stuff of legend !

Rob is on a brief visit to the UK and is looking forward to his return to the Bretton rink where many former players and Peterborough hockey pioneers will also be present for a get-together and we’ll make sure Rob gets introduced to the fans too !