The Phantoms fanbase has lost another true legend in recent days after Ray Wells passed away after a long battle with illness, just over six months after losing his wife Audrey.

Like his good wife, Ray was never just your average hockey fan and was helping out behind the scenes from his first days of attendance during the Pirates days of the 1990s. Although Ray would never forgive me for revealing too much, being the modest individual that he was, he made several substantial donations to the club in the early 2000s when the club was threatened by late season financial issues. 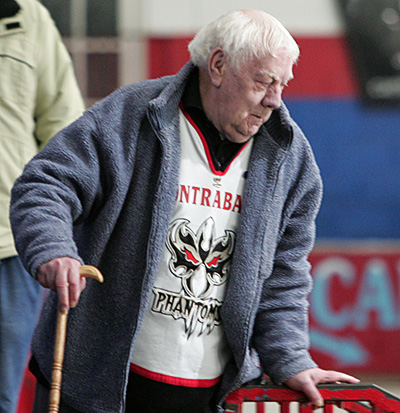 I always wanted to highlight his season saving generosity on social media but Ray was never going to let me do that ….. to him it was his way of supporting a team that gave him huge amounts of enjoyment.

In recent years, ill health made it impossible for Ray to attend games but he stayed in touch with everything that was happening in the Phantoms world, watching all the games via live streams and regularly sending me his private thoughts as to what was going right or wrong ….. his cutting and incisive analysis was always something to treasure !

I will also never forget the live score update service that was pioneered on Phantoms Online in the early 2000s when Ray, entirely at his own cost, would text in updates from Phantoms road games so that the fanbase could keep in touch online. A service that is now established across many hockey sites nationwide, Ray’s enthusiasm and generosity ensured that Phantoms fans benefitted from the service before anybody else did. I always smile when I think back to many close games running into the final minutes when Ray, who always complained that mobile keyboards were “too small”, would abandon texting and called in to give his own unique and very excitable running commentary to the final buzzer …… if only I could have recorded those !

As with Audrey, Ray’s modesty will inevitably mean his contributions both to the club and to the fanbase will never gain the level of recognition it deserves but trust me, if you are somebody who enjoys Peterborough hockey today then you really do owe both of these wonderful people a huge amount of respect.