“you always thought twice before hurling criticism in his direction as you knew that the chances were that he was right and you were wrong !”

On this day exactly 25 years ago, referee Mick Curry tragically lost his life in a car crash as he travelled back home to County Durham from Peterborough after refereeing a Heineken League Premier Division game involving the Pirates and Humberside Seahawks. Linesman Sean Byrne was also seriously injured in the crash which happened on the A1 and involved a head on collision with a car travelling in the wrong direction. 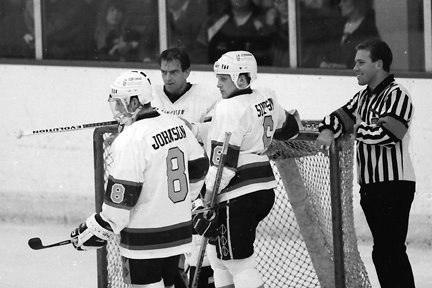 Mick was born in 1955 and played thorough the Durham junior system to eventually play for the mighty Durham Wasps but a serious eye injury put a hold on his career from 1980 through to 1982 after which, on medical advice not to risk playing any further, he chose to switch to the stripes and become a hockey official.

Mick was a linesman in 68 games and a referee in 166 which included seven Wembley Championship appearances and by the early 1990s his reputation had gained recognition on the world stage as he started officiating in junior world championship games.

If any “stripey” can ever be popular then Mick was that man. He would always turn up at Bretton dressed very sharply which underpinned his reputation on the ice for doing things right and with confidence. He was respected by both players and fans ….. you always thought twice before hurling criticism in his direction as you knew that the chances were that he was right and you were wrong !

“My last memory of Micky was having the pleasure of shaking his hand after he had refereed his last game between ourselves and Peterborough. I know that if Micky had still been here today, he would have achieved all of his ambitions and continued his dedication towards the sport which he loved so much. He will be greatly missed” – Peter “Jonker” Johnson, Humberside Coach, March 1993