“There was one time when Pirates scored and Arthur jumped so high that he cleared the seats in front and ended up flat on his face with a broken collar bone !”

The 1980s is often reflected on by Peterborough hockey fans of a certain age as a decade full of characters and it most certainly was. The fledgling sport in the city played host to a mixture of North American college kids and former NHL players, all of whom dominated Sunday nights at Bretton to the degree that they are still remembered today, four decades on.

But it wasn’t just characters on the ice that forged their legend, there were characters in the fanbase too. Ahead of the 1986/87 season, second tier Pirates rocked the hockey world by having the audacity to sign NHL “Iron Man” legend Garry Unger to partner former Washington Capital power forward Todd Bidner. They also sneaked in an unknown college kid on the undercard called Doug McEwen and, underpinned by a talented Brit Pack support team, Pirates ran riot to secure the league title almost before many fans had taken down their Christmas trees but something else was causing a stir among the fanbase that season.

After every Pirates goal, one fan stood out from the crowd with his wildly enthusiastic, arm waving celebrations made all the more prominent by his match night uniform of bright yellow jacket that quickly earned him the title of “Bananaman”. “Bananaman” was local driving instructor Arthur Lines who was adored by Pirates fans as much as he was mocked by away fans sitting opposite and who were face-on to Arthur’s exuberant celebrations.

Recently, I took the opportunity to catch up with Arthur and his wife Alison, who was also a keen Pirates fan albeit somewhat more restrained than her husband, at their home in Netherton. 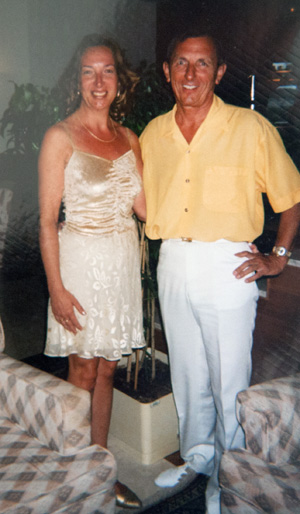 So let’s start with that wonderful yellow jacket ….. what was the story behind that one ?

Alison: “We were ballroom dancers and we used to dance at Brown’s Studios in Millfield.”

Arthur:  “….. and I used to have red trousers, green trousers, white trousers and, of course, that yellow jacket !”

Tell me you still have that jacket because I’m thinking it should be retired and hung on the rink wall !

Alison: “No, it’s gone. We took it to a charity shop near Van Hage a few years back and its gone now I’m afraid !”

I’m gutted about that ! So did the trademark celebrations just reflect your outgoing personality Arthur ?

Arthur: “Well we enjoyed it and just did what came naturally ….. or at least I did !”

Alison: “There was one time when Pirates scored and Arthur jumped so high that he cleared the seats in front and ended up flat on his face with a broken collar bone !”

I recall you were a driving instructor too.

Arthur: “Yes, we only did the dancing for fun and because we enjoyed it. My serious job was as a driving instructor and I used to advertise in the Pirates programme and sponsor a few things too !”

Did you teach any of the young Pirates to drive and were there any that proved tough to get through ?

“I think the Cottons were tough, I didn’t get them through but I taught quite a lot of them. I can remember Jason Porter, Kevin King, Euan King, James Ferrara, Cassie Dawkins, Craig Britton, Simon Wren, Stevie Johnson, Mark Johnson and, of course, lots of the supporters too” 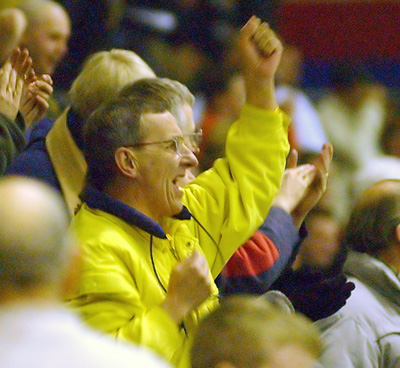 So when did the lure of ice hockey draw you to Pirates hockey nights ?

Arthur: “It was during the Garry Unger era of the mid-1980s …… there were some great games at that time and it really took off for us. We were season ticket holders at first and the queues used to go round the rink most weeks !”

Alison: “Yes, I still remember that Telford game towards the end of his time here. You just felt like you had played in that game ….. even as a fan. It was amazing !”

And were you with Pirates to the end ?

Alison: “Oh yes ….. we continued going right through to then and even a few seasons into the Phantoms until about 2006/2007”

So what brought it all to an end ?

Alison: “Well it started to change for us and wasn’t as enjoyable anymore. We found ourselves just sitting there and not as much in the game as before. We also suddenly found ourselves with a big drum right behind us and that was hard to deal with but, mostly, we just didn’t find it as exciting anymore !”

So, looking back ….. what was the most memorable game you recall ?

Arthur: “It was the Wembley game ….. semi-final against Cardiff on that Friday night when we beat them.”

Alison: “We were down near the front. We weren’t with the main Pirates fans as we got moved. We’d only got tickets at the last minute from Wembley so had to take what they had”

Arthur: “I remember I actually had a driving lesson that morning ! We went back down the following season with Rocky Saganiuk when we lost to Nottingham” 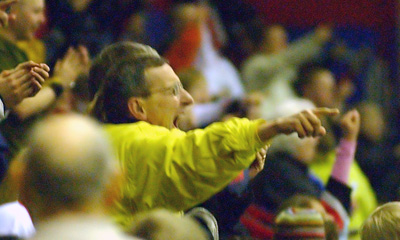 Such a fantastic atmosphere down at Wembley wasn’t there

Arthur: “Yes, brilliant …… and it was fantastic for the younger players like Jon Cotton and Stevie Johnson to get on the Wembley Arena ice in front of 10,000+”

Alison: “Yes, I remember that game I always referred to as that funeral game against Telford when they told us it was going to be the last ever game. I was alright until the end when Arthur tapped me and said that Stevie Johnson was coming off and that he was crying and they started to play ‘You’ll Never Walk Alone’ and that was it ….. I started crying at that point !”

Do you still keep in touch with the hockey at all ?

Thank you both for your time and for sharing your recollections ! 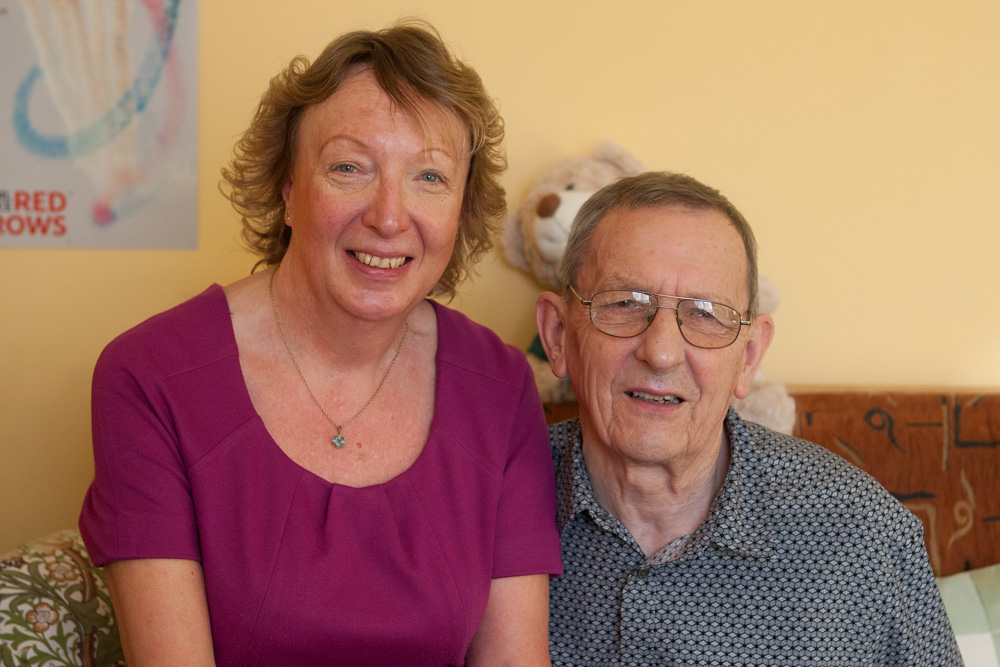 I used to sit a couple of rows behind Arthur and Alison and they were as big a part of my hockey nights as any of the players were. They were unique, they were colourful, they had an infectious enthusiasm and even today, many of our big name overseas players from that era ask after them.

Arthur is no longer in the best of health but that trademark enthusiasm is still very, very evident in everything that he does and everything that he talks about. A lovely couple and I dearly wish I could have secured that yellow jacket to “retire” in the rink to remember their support and presence by …… long live “Bananaman”, our very own fanbase superhero !!!

Sadly, Arthur passed away on 19th January 2021 after contracting the Covid_19 virus during a trip into hospital. His memory will live on with Pirates fans everywhere !