“My first impression of hockey in England was that the fans needed something else to cheer for than just football !”

Rob Carnegie arrived on the Peterborough hockey scene in September 1982 and, along with John Lawless, was Peterborough hockey’s first “import”. Their first home game saw 300 fans present ….. three months later and they were playing in front of 1,200. They made an impression !

By today’s standards, Rob would be a regulation tough North American D-man but back in 1982 local fans knew nothing about such players and, to them, he was part comic book superhero and part Greek God.

36 years downline and fans still talk of the day Rob was knocked unconscious in a game, rushed off to hospital and, despite being ordered home with concussion, rushed back again against doctor’s orders to play the last period bandaged up and with only one open eye to score two goals and win man of the match ….. certainly the stuff of legend !

I caught up with Rob recently to talk about his 46 game spell with the early Pirates.

What was your hockey background prior to heading over to the UK in 1982 ?

“I started out figure skating at the age of five and then power skated for two years.

The hockey started with the Aurora Tigers minor hockey association where I played most of my younger years …… and that’s where I first played against John Lawless.

At age 17, I played Junior A for the Aurora Tigers and managed to tear the ligaments in my knee. After that, I decided I’d better go to College ! I attended Centennial College in Scarborough for Architecture Technology and I played three years there for the college hockey team. That is where I first played with Johnny Lawless.”

So what took you from there to the UK ?

“Our assistant coach at Centennial, Paul Mitchell, also played with the Don Mills Comets and he had started sending players over to England to play. He asked me if I wanted to go to Peterborough and start with a new team that had formed and once I realised there were no jobs here in my new field after I graduated, I said I would love to go over for a year.”

Nowadays “imports” are flown over on fairly lucrative contracts with houses and cars thrown in. My guess is that John (Lawless) and yourself probably didn’t walk into a lucrative contract here …… so what was the deal back then ?

“They offered me £50 a week, a flat to stay in and free food at the ice rink (scampi and chips)! Peterborough didn’t have enough money for another “import” player but Paul convinced them to try and take two !

I said I would split the £50 a week with Johnny but if we started to get people to the games then we would look for an increase. They agreed so both of us came over together.”

“No we didn’t …… we flew overnight to London and had a few too many drinks on the way. When we were picked up at the airport, we were told we had a game in Altrincham that afternoon. John and I were still jet lagged and drunk …… we lost 4-12 !”

What was your first impression of the standard of hockey when you first started playing here ?

“My first impression of hockey in England was that the fans needed something else to cheer for than just football ! The hockey was like our Junior C level and we had both played at a Junior A level !

I played football (soccer) in Canada and I was quite good at it …… I was a striker ! I decided to go and introduce myself to the POSH football club and see if I could train with them. I even got to play in a couple of their reserve games !”

The fans back then started to show up in impressive numbers and with great enthusiasm ….. was that a bit of a surprise and what was it like to play in front of 1000+ Pirates fans ?

“John and I were giving free hockey tickets out to try and get more supporters to come to watch a Pirates game. We ended up getting hundreds of supporters over the first three months and we got a raise in pay ! The fans loved to come over and talk after a game and even share some stories over a couple of pints !”

What were the hockey memories from your Pirates days that you’ll never forget …… enjoyable, funny or both ?

I would have to say THAT game we played against Solihull Barons and Barry Skrudland who gave me a two-hander across my face and knocked me out cold. I was taken in the ambulance to go to the hospital and we got a flat tyre just around the corner from the rink ! We finally got to the hospital and I still had my equipment. The doctor stitched me up and told me that I had a concussion and I was to go home and rest. I told him no problem and I would get him some hockey tickets for a game. 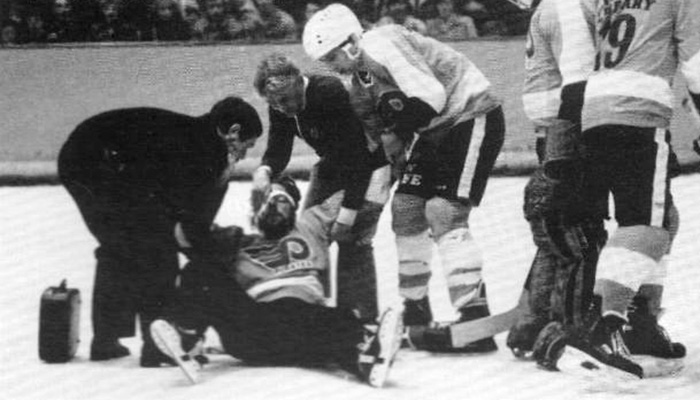 A friend of mine was at the hospital waiting for me so I told her to get me back to the rink. I had only missed the second period so I laced my skates up for the third period. I only had one eye open as the other one was closed shut and Chuck Taylor nailed me on the side that I couldn’t see and I hit the ice with my face, scraping the skin on my cheek !

I also remember going to my local pub the night before the games and I would walk in and there would be some beautiful young ladies eyeing me over and I would walk over and sit down with two grannies that I would talk to for an hour. I always put smiles on their faces and they would sit and tell me all about the birds at the bar ! By the way, I always only drank orange juice the night before a game !

We also once had a pub crawl with the POSH team and started drinking Jolly Roger (real ale – tasted like sh*t) at some place in town. I remember Granny (Granville Raper), Turkey (John Walker), David Seaman (England’s goalie who was a rookie for POSH at the time) were loaded …… actually, we were all hammered !”

What happened after you left Pirates …… where did you go and who did you play for ?

“I went back to Canada where I continued to play competitive hockey and played in many different leagues …… I’ll be 57 this year and I still play twice a week !

I play in a league with kids as young as 20, with some ex-NHL players on Tuesdays and I play in an over 35s league on Thursdays. I’ve had three knee operations and I go to the gym four to five days a week too. I hope to continue playing as long as I can bend over to lace my skates !!!”

Last but not least, what is life for you after hockey ….. what are you up to ?

“When I went back to Canada, I started working as an architectural technologist with a design/building firm. I married my wife and we have four children, three boys and a girl. They’re now aged 26, 24 and the twins are turning 23. All are healthy and successful !

My daughter skated for Team Canada in Synchro Skating and won a bronze medal at the Worlds in Colorado a few years back!

I’ve enjoyed a great career in construction as a Senior Director of Construction for a grocery chain and also developed my own companies in construction and sold them for millions of pounds. I retired at 50 and got bored so I decided to work part time for another grocery chain, building their automated warehouses. We have recently done a deal with Ocado from England.

I’ll be coming over for a few meetings and hope to be able to see a few hockey games. My wife of 30 years and I have been travelling the world and are doing a 26 day cruise in May around the Baltic Sea and the British Isles.

I’m proud to say I was #3 for Peterborough Pirates and will always cherish my memories with my teammates and my experience of playing in Peterborough !”