First up, the team ….. how did they perform in the league season ?

Tigers finished in 3rd place behind Hull and champions Sheffield. They won 27 of their 35 league games and were well in contention for the title until a disastrous meltdown in February which saw them lose five straight games, three of those in the league.

Pretty good with nine wins from the last eleven including a thumping victory over the champions Sheffield on Saturday night and wins over runners up Hull Pirates.

Still Tom Watkins …… and he’s been lacing them up for a few games of late !

Dennis Bell, former Manchester Phoenix and Team GB junior, holds the starting spot and is running an impressive 92% save percentage so they have a very capable netminder. Bell is backed up by former Deeside Dragon Jonah Armstrong.

Former Elite League and Team GB veteran Jonathan Weaver is still providing the backbone to the Tigers D and he is joined by Daniel Rose who was a regular for the Tigers EPL side, Adam Jones who started the season with games for both Elite Belfast and Elite Guildford and 19 year old Jordan Stokes has played up for the Coventry Blaze this season. The remaining D are relatively inexperienced but have CVs that suggest they are not lacking in talent. 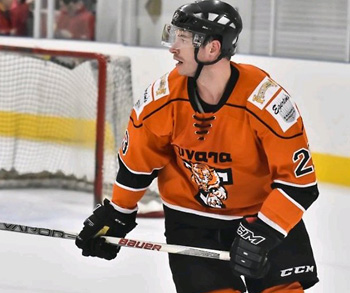 …… they do combine for 78 years of age between them ! Other names that may be familiar to Phantoms fans are Scott McKenzie, Warren Tait and Joe Miller who retired earlier in the season but returned last week for a bit of shameful pot hunting in the play-offs ….. and yes, he has played enough games !

No goons in this season’s Tigers side with no player racking up significant penalty points.

Tigers have a number of juniors away with England U19s who will be unlikely to return in time for Coventry. Their absences have seen the return of Joe Miller and even the coach Tom Watkins dressing for games but that didn’t stop Tigers beating champions Sheffield in the Divisional play-Off Final !

On average, teams score more goals per game in the North than the South (4.51 v 3.61) which could mean more prolific forwards or weaker defences or both !

“Telford put everything into their top line – stop that and you stop all they have up front. They like to play with a high man cheating for the big rink length pass so watch out for him. Bell, their netminder is good if he has space but get in his face and rattle him and he has a tendency to get very rattled and off his game !”

Defensive discipline will be required as Tigers clearly have firepower even if it is ageing firepower on one line but it is hard to see how the Tigers forwards can match up to those Phantoms have dealt with against Basingstoke so keeping them wrapped up should be well within our capability. May need to pay particular attention to defensive playmaker Jonathan Weaver who likes to skate the puck out and set up the plays and has nearly two assists per game and is third highest points scorer overall …… keep him pinned down !

Defensively, aside from Weaver, they have a young D and we should have more than enough to give them problems even without Pliskauskas and Griffiths.

Tempo could be important in this one. Phantoms will dress four lines, Tigers can’t match that. On Sunday night in Sheffield, they dressed only 15 skaters and that included their coach so two and a half to three lines at a real stretch. Play hard for sixty minutes and see if Tigers 15 skaters including two players over 40 years old can keep up ….. I doubt they can but we must not give them chance to play this with just two lines !

So that’s it ….. keep it tight at the back as with the recent Bison games, roll at least three lines, roll them fast and hard and Phantoms win this one !