That presence came in the form of a guest book. The idea was to leave “Hi Ron – great site !” type messages but the few fans who had made it online were already making their views known on all aspects of the team/club leading to responses from others and back in 1997 this was truly exciting and fascinating stuff for fans who were limited to match nights for their hockey banter.

I had already ordered my own home PC from Time Computers in Queensgate – you had to order PCs and wait for them to be built in those early days – but having purchased a copy of “Websites Made Easy” magazine from WH Smiths, I was already planning for big things on its arrival !

Inspired by “Ron”, I was planning to build my own Pirates site that would primarily be a “down memory lane” venture rather than any form of current affairs setup but I had decided that there would be a discussion forum on board because I had seen one on the Fife Flyers website and thought they were wonderful things !

I needed a name that didn’t sound in any way official and after some discussions over a beer with mates, we came up with “Twisted Sock” which was a term that was rather unfairly used by a POSH player when mocking an injured Kenny McKie earlier that decade. It didn’t make much sense but it made us laugh and that was good enough ! 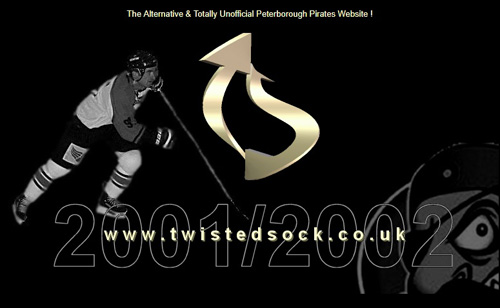 So Twisted Sock launched in 1998 and and slowly developed a web presence among Peterborough hockey fans but we are talking a few dozen back then as most still had no access to the internet. Things changed, however, in 1999 when the club once again plummeted into financial crisis and fans started to use the site to rally around the club from all over the country.

After that crisis was survived, Twisted Sock’s forum had grown to a couple of hundred members and the previous nostalgic banter had very much given way to current affairs discussions. Fans became very interested and often critical of whatever they could see going on at the club. They were more than jumpy at the prospect of a further crisis and no longer were they trusting of all that was going on behind the scenes ….. fans were now as interested in off-ice matters as they were on-ice !

By the time Pirates became Phantoms in 2002, Ron’s site had sadly vanished (we still didn’t know who he was !) but the club had at last stepped in and set up an early official website but Twisted Sock was now well established and running with over 400 members signed up to what had evolved into a very cosmopolitan forum. It had also established itself as the most reliable and certainly fastest source for news which didn’t always endear it to the club. I still remember being ambushed on a match night in 2001 and being hauled into General Manager Doug McEwen’s office who closed the door, sat down, looked me in the eye and asked “where do you get your info from ? You know who we are signing before I do !”. We had a laugh over it but I think Doug was actually more than a little frustrated !

In the summer of 2002, like many at the time, I was demoralised by the loss of the Pirates and felt it was right to lay the site to rest along with the team I had supported since their 1982 beginnings but the fans were not having any of it. They wanted “their” forum back so I bowed to pressure and brought it back. Twisted Sock did close and the website was no more but the forum survived and stood alone under the new name of “Phantoms Online”. 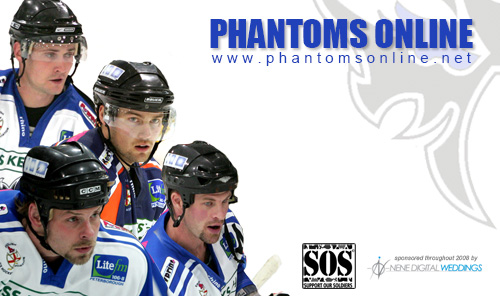 lively. Match night threads ran to many pages and very little went by without close scrutiny and comment. It was, in-effect, the Facebook fans group before Facebook had arrived. By virtue of sheer numbers alone, it gave the fans a real voice at the club and that sparked off many seasons of quite ugly “us and them” conflict with the club.

The owners of the Phantoms were good people but they were not internet people ….. not in any way. They confessed to having no direct access to the internet let alone Phantoms Online but more importantly they deeply resented the independent nature of the site. They were used to old school control of information via programmes and local media and they deeply resented the presence of an independent fans voice and they particularly resented me personally for creating and maintaining it.

Phantoms Online was repeatedly targeted by club officials for “inappropriate” comments on “inappropriate” subjects. It became very ugly with many threats being made, including threats of physical violence against myself and one or two other regular posters. Of course the “inappropriate” elements never actually existed ….. we had a strong team of moderators and simply did not allow the sort of comments that were being suggested.

I repeatedly provided screenprint proof that such behaviour was pure fiction but it turned out that the club owners were being fed lies by those that wanted to destroy Phantoms Online and, without their own means to verify it, they were swallowing it hook, line and sinker !

Eventually, after several Phantoms Online regulars were attacked in the rink after yet another “fake news” story, I reluctantly decided I had to pull the plug and replaced the site with an online message that simply stated that I would not bring it back until the club dropped its ill-founded hostility towards it and its members ….. which, ironically, was now most of the fanbase !

The following day, much to my shock, the back page of the Peterborough Evening Telegraph carried the conflict story with bold headlines. I had reporters ringing me and the club owners were being chased likewise and it was the sort of destructive publicity that neither of us wanted.

It was a major low point but it proved a hugely important turning point for the club as it was very much the point at which the club started to see this form of social media presence as a positive – or at least a potential positive – rather than something to despise. Whether that was because they had suddenly seen the light or whether it was because they realised that it was a battle they were never going to win, who knows but from that point it all changed.

The club then started to work with and even communicate via Phantoms Online which left the fans happy and the club, at least relatively, happy !

In 2007, I started working with the club on all digital media matters and in 2009, rather ironically given the past, I took over the running of the club’s official website and set about developing the web presence and framework that we have today. The club owners were still well short of being “internet savvy” but were happy to let me lead them wherever I felt we needed to go so I jumped into the Facebook revolution of that time and set up the Fans Group that we all use today along with the GoPhantoms Twitter presence.

My dream in the late 1990s was to give the fans a voice at this club because they most certainly didn’t have a voice back then. It was not a crusade for rebellion and overthrow but was borne out of a passionate belief that the fans are the most important stakeholders at this club and their input to the direction we travel is not only preferable but essential if we are to succeed. I remain unconvinced even today that there is total buy-in to that message at the club which is why it is vital that we should never take it for granted and continue at all times to campaign for and demand input.