A huge night on this date in 1983 ….. or at least us fans believed it was. After a great debut season, Pirates played host to the legendary Streatham Redskins complete with players like Gary Stefan and Gary Brine who were considered legends to us fledgling hockey fans. Pirates won the game 3-1 which included a late empty net goal. We felt on top of the world that night even if the Redskins were possibly already out on the golf course mentally !!!

In 1992, Phantoms made their second Wembley Championship Final appearance under coach Rocky Saganiuk but despite a brace from local lad Carl Stripling, Pirates eventually succumbed 3-7 to Nottingham Panthers.

On this date in 2004, Phantoms made the long trip to the Isle of Wight for the first leg of the EPL Cup Final which they won 3-1 against the Raiders.

Just the one game on this date and it came in 2004 when Phantoms played the second leg of their EPL Cup Final against the Wightlink Raiders. Already 3-1 up from the previous night’s first leg, a 4-1 victory secured silverware for Phantoms. 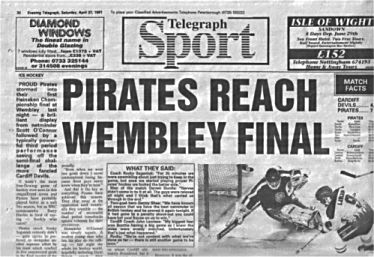 1991, played on a Friday evening but featured on BBC’s Saturday afternoon Grandstand, underdogs Pirates took on the all conquering new boys on the block, Cardiff Devils, in the semi-final of the Championship Finals at Wembley. Boasting the likes of Doug McEwen, John Lawless, Shannon Hope, Steve Moria, Nicky Chinn, Paul Heavey, Peter Smith and more, Devils were coasting at the game’s midpoint but they should never have underestimated underdogs Pirates who came back to win the game 7-4 in what many still consider to be the greatest performance in our 36 year history !

The night of the big Wembley Championship Final at Wembley in 1991 and featured live on BBC TV. Pirates took the lead against favourites Durham Wasps and were still skating with the hot favourites until late in the game when they ran out of steam, leaving Wasps to win 4-7.