1983 saw Pirates visit the infamous “Duck Pond” at Grimsby, a rink about as long as Bretton is wide, where they became the first team to defeat the home side in two years with a typical duck pond 10-9 shoot out.

1984 saw Bretton hockey pretty much at its peak in popularity as 1,350 turned out to watch Pirates defeated by the visiting Blackpool Seagulls 3-6.

A sad day in 1989 that saw Pirates legend John “Turkey” Walker retire from top flight hockey after breaking his leg playing for Lea Valley at Slough.

In 2009 Phantoms beat Bracknell Bees 2-1 at the Hive in the first leg of the EPL Cup Semi-Final.

Unlucky 13th for Pirates as they failed to win any of their five fixtures on this date ! Phantoms at least won two of their four games on 13th February but probably a date to avoid in future !

1988 saw a late Kenny McKie goal secure a Valentines Day 8-8 draw on the road against no less than the Nottingham Panthers.

In 1987, Pirates hosted the Medway Bears (now known as Invicta Dynamos) and found themselves 2-8 down at the end of the second period. No problem as the swashbuckling Pirates stormed back to win the game 10-8 !

You’ve probably seen the photo of fans queuing around the rink building to watch this one in 1985. It nearly didn’t go to plan as visitors Glasgow Dynamos raced clear only for Pirates to fight back for a 14-10 shoot-out win with goals from Lawless 4+6, Jutras 4+2, Hope 2+4, McKie 2+0, MacDonald 1+3 and Alan Walker 1+0.

1986 saw the debut appearance of the legendary “Spot” the flag above Animal Korner …… Happy Birthday Spot !

In the infamous 1996/97 season, Pirates lost a typical home rout 5-16 to Swindon Ice Lords who iced eight imports …… albeit Pirates did give a debut to their sole overseas player Lee Saunders (RIP).

1990 saw Peterborough Hockey “iron man” Jason Porter score his first ever Pirates goal in a 5-16 defeat in Fife where netminder Bert Amos made his debut on 57:15 ! 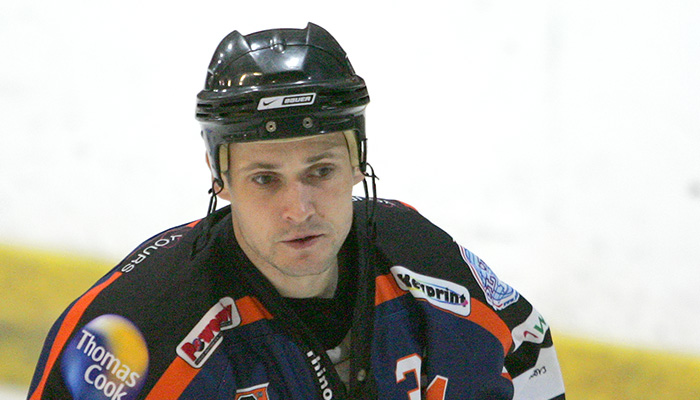 2013 and the day that Phantoms legend Maris Ziedins announced his forthcoming retirement at the end of the season ….. still very much missed on and off the ice !