The NIHL play-offs this season come in the form of TWO play-off competitions …… the divisional play-offs and the National play-offs with a “championship” trophy up for grabs in each !

There are separate divisional play-offs for the NIHL South (that’s our division) and the NIHL North.

The competition involves the top eight teams in the final league table and is played on a two-leg knockout basis with each tie being decided on home and away aggregate scores. Pairings are based on league position with 1st v 8th, 2nd v 7th, 3rd v 6th and 4th v 5th.

The Quarter Finals for the NIHL South play-offs are ……….

The Quarter Finals for the NIHL North play-offs are ………. 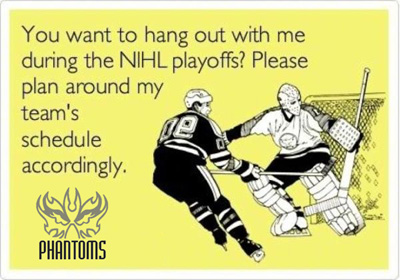 So …… if Phantoms beat Milton Keynes, they will face the winners of Swindon v Streatham on the weekend of 24th/25th March with Phantoms playing the home 2nd leg on the Sunday.

If Phantoms then make the final then that will take place over the weekend of 31st March/1st April …… who plays first to be dependent on who we would meet in the final.

The National play-offs will bring the top two sides from both North and South together to determine an overall NIHL winner. This competition will take place at Coventry over the weekend of 7th/8th April and will involve the two teams who made the National play-off finals in the North and the South, thus four teams.

The only difference from the norm is that in the two-leg Divisional play-off games, there is no overtime and no penalty shots in the first leg game. If the game is level after three periods then that is the result ….. a draw. However, if the second leg finishes with the aggregate scores level then there will be the usual overtime and penalty shots.