“I had a great time at Phantoms and I really enjoyed playing there …… good coaching staff and even better fans !”

So how did you first get into hockey and where were you playing at the time ?

“I first started when I was around five years old. My Dad used to play so I looked up to him and he put me on the skates at a very early age. By the time I was six, I had started playing for my first club called Prizma (Pardaugava)”

When did you actually leave your hometown and head over to the UK ?

“I came over in 2010 when I was ten years old. We came over as a family and I looked to carry on playing hockey in the UK”

You started here at Nottingham I believe ?

“That’s right, I started my UK hockey career at Nottingham with the U16 Nottingham Cougars ….. they were my first club here. I think it was when I was around fourteen that we moved to Peterborough and I started playing for the Phantoms U16s”

Do you remember who were you playing alongside when you first played in Peterborough ?

So how did you first get involved with Phantoms senior side …… who called you up and how did that feel when you got the call up ?

“It actually all started when I was playing briefly with Sheffield U16s and U18s in the 2013/14 season. I was just looking at getting more ice time and I knew there was already a Latvian player that played at Phantoms called Eddie Bebris. I knew of Eddie because he used to play at Sheffield too so I spoke to him and asked if he could speak with Slava and maybe let me go on some training sessions with Phantoms. So that worked out well and it didn’t take long before Slava saw something in me and decided he wanted me on board. How did it feel ? Of course it was a great feeling at that time because I was making my big junior step up into seniors”

Moving on to the 2016/2017 season, you appeared to go from strength to strength with fans taking a real liking for your hard skating and hard hitting style but then it all went wrong and you were gone …… much to the dismay of the fans. Can you give fans an insight into what happened and how you ended up back in Latvia ?

“Yeah of course my last season was awesome …… it was great to be a part of Phantoms. Slava trusted me and he gave me some great playing partners especially Peter (Stepanek). I have great respect for Slava giving me the opportunity to start my senior career under him and the things he has taught me and how to be professional in what I do. I enjoyed the season and Peter and I just got along very well and it showed in our chemistry out on the ice”

So what went wrong ?

“I was always going to play abroad at some stage but then some issues arose and I ended up at HK Rīga. I haven’t had the best stats with them this season but it was another big learning curve in my hockey career …… different team mates, different atmosphere, more professional, so it’s all really positive”

Care to elaborate at all on what the issues were that saw you leave Phantoms ?

“It was just personal issues. I know people will say all sorts of things but I really don’t want to talk about it in any more detail ….. there were some issues but they were all sorted out with Phantoms in the end”

If you could have that time again, would you do anything different …… do you have any regrets ?

“No ….. I don’t have any regrets. Everything happens for a reason !” 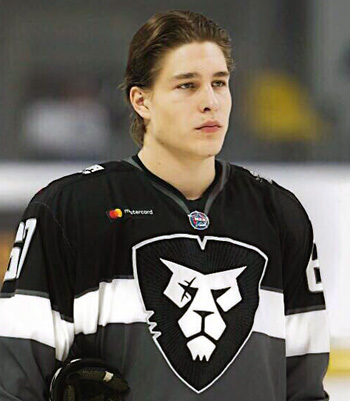 How did you get involved with HK Riga ?

“I got offered the chance to play with them last summer but I didn’t go to them straight away. They’re a very good club at bringing up Latvian national team players. They play in the Russian MHL which is a top junior league. Playing each week against tougher teams makes everyone better over time. Unfortunately, before going to play for the Latvian U20 national team, I had a bad concussion injury and was out for a month without playing any hockey”

I’m certainly not familiar with the MHL so how does the standard and that at HK Riga generally compare with the standard you left at Phantoms in the EPL ?

“In my opinion, the MHL is more aggressive, faster and better to watch compared to the EPL at Phantoms. Phantoms hockey was more about passing and was a slower game using more experienced players. It is also a full time professional set up here in Riga …… you get meals after training and when you go on the road for away games, all the meals and the hotels are top notch. Over here we have training sessions every day and gym sessions every day. Phantoms was more like semi-professional as some players worked and played but here everyone is playing hockey full time and don’t work elsewhere”

Do you keep an interest in how Phantoms are doing over here or is it all behind you now ?

“Yes of course …… I still look across and watch all the game highlights to see how the team is doing and I look at the stats to see who’s getting the most points. I had a great time at Phantoms and I really enjoyed playing there …… good coaching staff and even better fans !”

So if the opportunity arose and the invitation was there, do you ever see yourself coming back and playing for Phantoms ?

Thanks for your time Martins and good luck for the future wherever you play.