On Friday, Phantoms make their first tilt at serious NIHL silverware when they take on the Sheffield Steeldogs in the final of the Autumn Cup.

The Autumn Cup involved six of the seven teams that dropped down from the EPL in 2017. Its an elite trophy competed for by the very best teams in the NIHL north and south. No easy games, no lucky breaks, you have to be the best to make the final of this one and this clash features the #1 side in the south and the #1 side in the north ….. just as it should ! 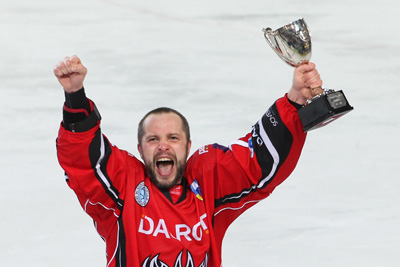 What’s it worth ? Well its one of the four “majors” at this level of the sport so its important but, for Phantoms, it has added importance. First up, last season saw us come up short in all competitions …… no silverware and that hurt, especially with the powerful roster we had assembled. Secondly, a chance to win a trophy on home ice really is something very special.

Three of Phantoms last four trophy wins have been away from our home base in Bretton. Two at Coventry, one in Milton Keynes and one on a ferry near the Isle of Wight ! The photo at the top of this page came from the one trophy win we have had on home ice since 2004 and that was a very special night in 2009 when we won the EPL Cup Final. That’s one trophy on home ice in fourteen years so this Friday is an opportunity for a very special night indeed and one that will be remembered for many years to come ….. an opportunity for you to boast “I was there !”.

Where’s it at and what should we expect ? Well its where we’d all probably want it to be at ….. dead level and, in effect, a one game sudden death final for a trophy. Phantoms will have home advantage but in three clashes to date this season, they have failed to beat Steeldogs in regulation time so anybody who thinks this should be a stroll in the park should think again. Dogs know our game and have demonstrated an ability to stop us 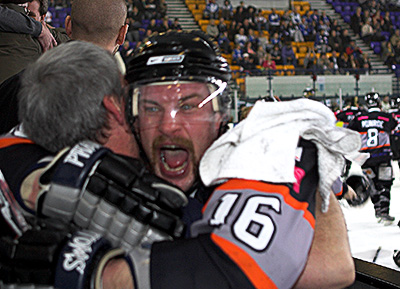 playing the way we want to play so we will need to be both tactically smart and very, very good to take this one ….. expect a tough battle that may well go right down to the final moments !

What do WE need to do ? First of all be there ! The players have done all we could ask of them by battling through to the final and now its our turn to make sure we turn up to play our part. There may well be nothing to choose between the teams on the ice so the team off it – that’s you and me – may be the crucial “special team” that hauls us over the winning line.

Sunday night showed just what an atmosphere can be created if we turn up in numbers and make a bit – okay a lot – of noise. The players knew it was special and they responded to it on the night. Same again ? Hell no ….. we can and need to do even better than that ! 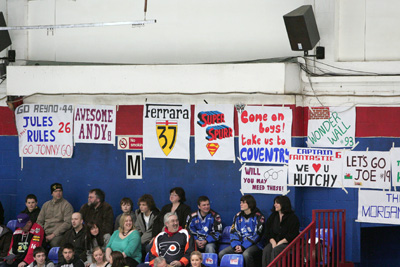 Dig out flags and banners, if you don’t have one then make one just like we used to do (left). Its Christmas, go buy some blue/orange/white balloons and get them flying when the team comes out. Do something different for this one and, above all else, make this a PLUS ONE game. Look around you at home, in the office, in your street, in your pub …… find somebody and get them in the game. At last you CAN guarantee them a great night out and if everybody who reads this adds a PLUS ONE to their attendance then that will be one hell of a wonderful problem for the club to cope with on the night.

I will be there and I’m already PLUS ONE and looking for a PLUS TWO …… let’s all play OUR part and make this a very special night !