“On this day in 1984, Pirates hosted the Bournemouth Stags for what was always a more than feisty fixture. Pirates won the game 7-4 and the crowd at Bretton was a stunning 1,505 !”

On this day in 1988, Pirates played and lost to Tony Hand’s Murrayfield Racers 6-11 in a game scheduled to be broadcast live on BBC’s Saturday afternoon Grandstand programme ….. but, sadly, the Beeb pulled out after deciding the lighting at Bretton just wasn’t good enough !

A sad day in 1991 as Bournemouth’s Westover Ice Rink (image above), home of the Bournemouth Stags, closed for good.

Phantoms won all four fixtures on this date including a 2-1 home victory in 2017 against MK Lightning in the EPL Cup Final ….. the away leg didn’t go so well !

In 2001, Pirates won 6-3 on the Isle of Wight. A long round trip for a universally disliked “Planet Ice Shield” competition !

In darker days in 1997, Pirates were on the back end of their worst season ever but were thrown a sympathetic series of fixtures against Murrayfield Royals from some tinpot lower league in a quickly made up British Premier League Shield series and Pirates actually won 7-2 in Edinburgh before then winning again back in Bretton the following day …… after which both teams got bored and the series collapsed unfinished !

A visit up the road to the infamous “duckpond” ice rink at Grimsby in 1985 resulted in a thumping club record road win to the tune of 26-2 ….. that record will surely never be beaten !

2003 saw play-off action for Phantoms who tied 4-4 with Swindon Lynx in Bretton ….. we had no overtime in those days.

On this day in 1984, Pirates hosted the Bournemouth Stags for what was always a more than feisty fixture. Pirates won the game 7-4 and the crowd at Bretton was a stunning 1,505 !

In 2007, Phantoms beat Solihull Barons 7-6 in overtime in a Bretton barn burner of a play-off fixture.

A big night in 2009 saw Phantoms travel down to Guildford for the first leg of the EPL Cup Final. Some Phantoms players arrived late for the midweek fixture but Flames refused to delay the start ….. a cunning plan that backfired as a determined Phantoms held on to only lose 4-3 on the night.

A less impressive night, and hopefully not a bad omen for this Sunday, came in 2017 when Phantoms lost 2-4 in Milton Keynes after penalty shots to lose the EPL Cup Final on aggregate …… not a pleasant night for travelling Phantoms fans ! 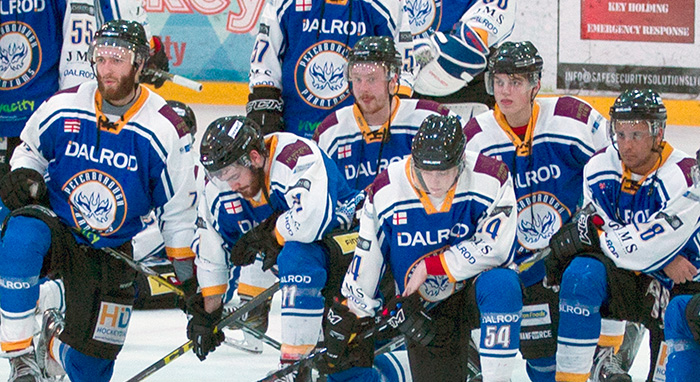